The Democratic social spending and climate reconciliation bill being advanced on Capitol Hill includes funding to provide universal community college tuition funding for two years. Who goes to community colleges, how do they currently pay for it, and what is the value of their degrees? Here are five facts on community college in America. 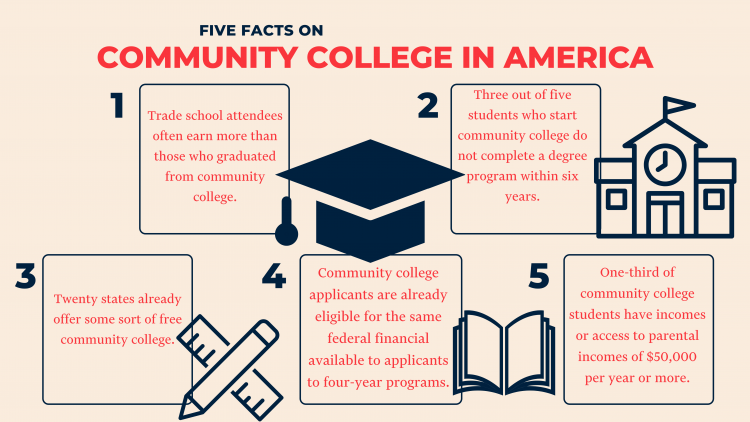 A 2015 study found that Coloradans with associate’s degrees earned on average $36,920 after five years and $42,484 after 10 years. Those with certificates from a trade school — which offer specific training for roles ranging from plumbing and welding to dental hygienist and cosmetologist — earned $44,070 after five years and $48,884 after 10 years. Nationwide, in 2017 occupations requiring a certificate averaged $37,670 per year, while those requiring some college but no degree averaged $35,250.

As for going on to a four-year institution, while about 80% of those who enroll in a community college intend to ultimately transfer to such a school, only about 30% of them actually do so.

While community college is sometimes viewed as primarily a resource for those with low incomes, the National Center for Education Statistics reported that in 2019, 33% of attendees had access to annual incomes of $50,000 per year or more (and about half were dependent on parents), while 37% had access to incomes of $20,000 per year or less (and just 23% were dependent).

No Labels is an organization of Democrats, Republicans, and independents working to bring American leaders together to solve problems.

Five Facts on New US Military Aid to Ukraine