Five Facts on the US Electric Grid

The bipartisan infrastructure bill that is being considered in Congress includes $73 billion for upgrades to U.S. electric power infrastructure, $46 billion in cybersecurity funding to support critical infrastructure needs, and funds to accelerate development of smart grids, advanced transmission, and next-generation power technologies. Here are five facts on the electric grid in America. 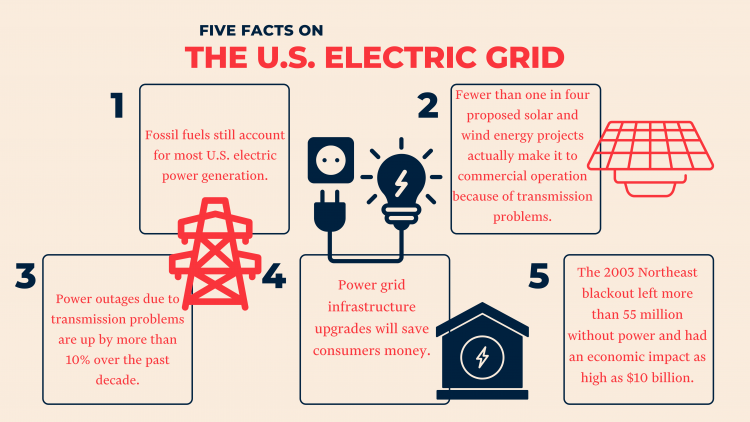 Fossil fuel-based power plants — burning coal, oil, or natural gas — create nearly 60% of the nation’s electric power, while nuclear power accounts for about 20%. Solar, wind, and other renewable energy sources generated 21% of U.S. electricity in 2020, but according to the Energy Information Administration, that share is expected to double by 2050. Nearly 95% of net new electricity capacity added to the U.S. grid in 2017 was renewable. In 2020, solar power generated enough energy to power 18 million U.S. homes.

2.         Fewer than one in four proposed solar and wind energy projects actually make it to commercial operation because of transmission problems.

To accommodate the need for more renewables, the U.S. will need to increase transmission spending from an annual average of $15 billion to $40 billion a year from 2030 to 2050. Annual spending by major utilities on the U.S. electric transmission system increased from $9.1 billion (in 2019 dollars) in 2000 to $40 billion in 2019.

Outages aren’t the only threat from bad transmission lines, either. The 2019 Camp Fire in California, ignited by a faulty transmission line, resulted in 85 deaths. Severe weather was cited as the predominant cause of 638 transmission outages reported from 2014 to 2018.

Americans for a Clean Energy Grid said in a 2020 report that large-scale transmission upgrades would cut consumer electric bills by more than $100 billion by 2050 and decrease the average electric bill rate by more than one-third, saving a typical household more than $300 per year. Home installation of smart thermostats, which make it easier to avoid wasting energy, were projected to increase from nearly eight million in 2016 to 43 million in 2021.

An intentional cyberattack on the U.S. power grid could be devastating. The National Research Council says the grid is “vulnerable to intelligent multi-site attacks by knowledgeable attackers intent on causing maximum physical damage to key components on a wide geographical scale.” China and Russia have both displayed the capacity and intent to launch cyberattacks on adversaries’ power infrastructure.

This article was first published on Real Clear Policy.

Five Facts on US Gasoline Prices

Five Facts on Twitter Censorship and Targeting of the Right